The Crofton Construction team is pleased to have completed the replacement of the City of Suffolk’s Old Mill Road Bridge. The existing bridge was built in 1955, constructed of wood, steel, and timber piles, and beyond its useful life.  VDOT and the City of Suffolk determined that a complete replacement would be necessary.  As prime contractor, Crofton performed the demolition and disposal of the current bridge, furnished and installed fourteen 16” square x 50’ long concrete piles, two 75’ long concrete test piles, cast-in-place two concrete abutments, placed 260 tons of rip-rap around new abutments, and installed 8 pre-cast concrete bridge deck panels that were 41’ long. Preparing the site for the new bridge consisted of tree and asphalt removal, excavation, and additional fill and bedding to raise the roadway, as well as new asphalt overlay for roadway. The narrow roadway and existing tree canopy made for a limited work area, so all foundation and sheet piles were driven from the south side of the bridge using a 200-ton crane with 150’ of boom. Cofferdams were used on both the north and south side of the bridge when driving the foundation piles and forming new concrete abutments. Bridge replacement is an important part of our nation’s infrastructure improvements and we are proud to play a role in that effort. Thanks to the Crofton team members who worked on this project and contributed to its success! 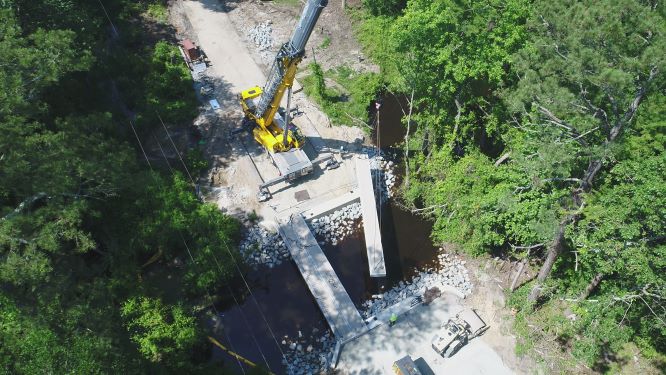